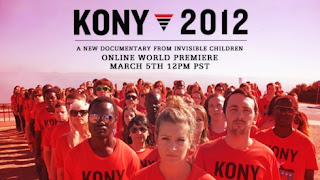 I’m sure many of you have seen the video of #StopKony or #Kony2012. The video originally posted on YouTube and vimeo has now reached more than 7 million visits and I’ve seen –almost- all of my Facebook friends sharing it on their walls (myself inluded). The 30-minute film aims to raise awareness about Joseph Kony, the Ugandan warlord who is the “most wanted” criminal of the International Criminal Court's rank. It was produced by the American NGO Invisible Children.

I was rather impressed with how viral the video went. All of my friends who usually share ‘memes’ on Facebook and play City Ville, suddenly were human rights defenders after watching the video. I’ve got to see it!

I must confess that after watching it, I started surfing the web to see how could I help with this impressive work. First thing I saw: the “Stop Kony Kit” including a bracelet, posters, and stickers for only 30.00 USD. Plus, if I wanted it with books and shirts –to proudly show I donated money- the price was over 200 USD.

There was a little voice going over my head telling me I shouldn’t buy the kit. However, clicking "share" on Facebook was not harmful. Also, I changed my cover picture to the # StopKony logo, because I thought it was carefully -and beautifully- designed, and why not? I wanted to be part of the campaign!

The 'haters' were about to come out. I confess I love reading them because they unfold where the “politically correctness” do not dare. Then my doubts started. I began to wonder how the identity of the war children was not protected in the film, where does the money for Invisible Children go (as in theory, you pay yourself for POP material), and what would happen after Kony’s capture? Whether Kony is evil or not, is not debatable. He is a criminal who has spent 20 years around with his extremist group Christian LRA (Lord's Resistance Army, in Spanish). He has go to jail. Period.

I started doing some reading about Kony and Invisible Children with the help of a colleague on Facebook. Many questioned the transparency of Invisible Children in the U.S., others believed that video was quite "indie", but what I found most disturbing after seeing it for a second time, is that it reinforces the view that white Westerners must save Africa. Isn't it a bit "imperialist"?

I also wonder: Why is it after 20 years that we want to draw attention to this criminal? Or as noted by this article in Foreign Policy: Why Kony and not the Ugandan dictatorship? Remember the ruthless persecution of the LGBT community in Uganda, among other things.

If the video states that Kony is no longer in Uganda, then why supporting the intervention of US troops in Uganda? It is not clear. Then, I recalled the Hypodermic Needle Theory I learned in college.

Having worked with NGOs has taught me to always ask myself “how I can help the victims better, faster and more efficiently?". Whilst it is admirable that we want Kony in jail the video does not tell us what to do with the victims: Ugandan children. How to get them out? As Michael Wikerson (@ MJWikerson on Twitter) who has also lived in Uganda, asks: 'What will happen to the alienated children after Kony is gone? It makes me wonder, how to put across a message of peace with the jargon of war to an international audience?

There are many questions that remain unanswered on # StopKony. However, it’s useful to see how NGOs could use viral marketing to put forth their messages to broader audiences. –It proves is affordable for small NGO, not only for the biggest ones as Amnesty International-

I welcome the debate that this video has started!

If you want to read more on the other side of the coin: